The Day that Changed Everything! 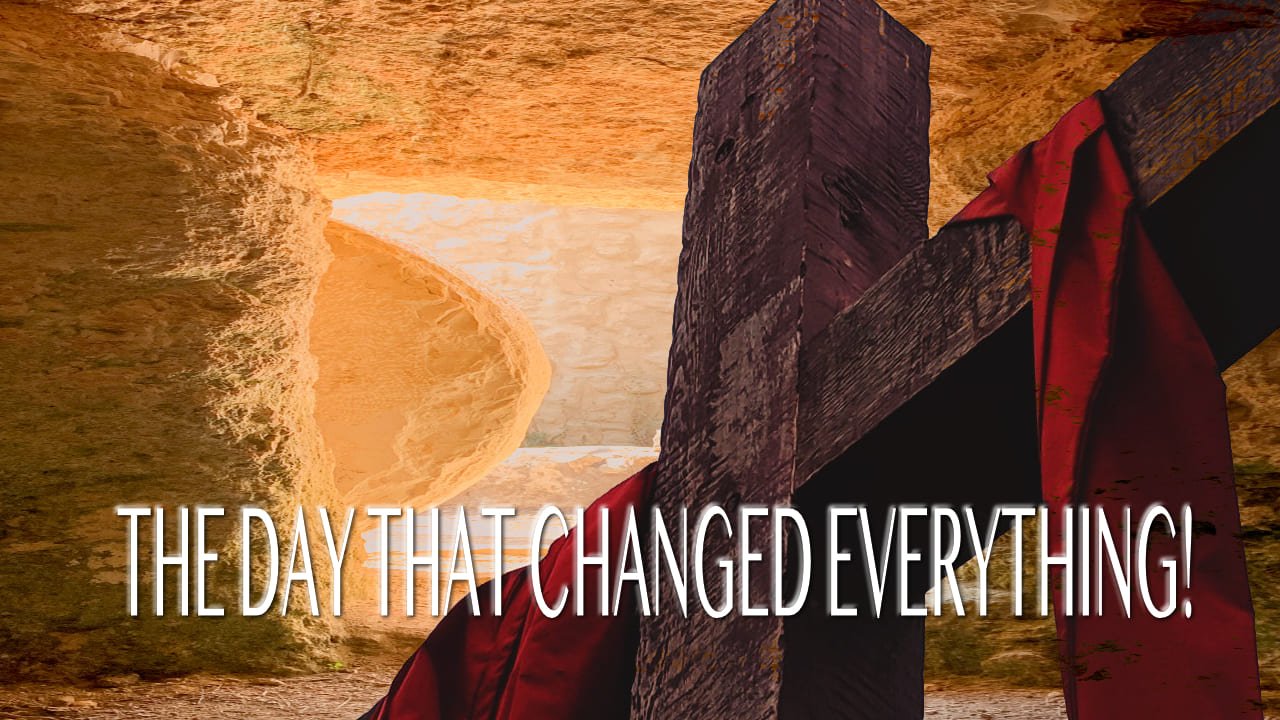 Now that same day two of them were going to a village called Emmaus, about seven miles  from Jerusalem. They were talking with each other about everything that had happened. As they talked and discussed these things with each other, Jesus himself came up and walked along with them; but they were kept from recognizing him. He asked them, “What are you discussing together as you walk along?” They stood still, their faces downcast. One of them, named Cleopas, asked him, “Are you the only one visiting Jerusalem who does not know the things that have happened there in these days?” “What things?” he asked. “About Jesus of Nazareth,” they replied. “He was a prophet, powerful in word and deed before God and all the people. The chief priests and our rulers handed him over to be sentenced to death, and they crucified him; but we had hoped that he was the one who was going to redeem Israel. And what is more, it is the third day since all this took place. In addition, some of our women amazed us. They went to the tomb early this morning but didn’t find his body. They came and told us that they had seen a vision of angels, who said he was alive. Then some of our companions went to the tomb and found it just as the women had said, but they did not see Jesus.” He said to them, “How foolish you are, and how slow to believe all that the prophets have spoken! Did not the Messiah have to suffer these things and then enter his glory?” And beginning with Moses and all the Prophets, he explained to them what was said in all the Scriptures concerning himself. As they approached the village to which they were going, Jesus continued on as if he were going farther. But they urged him strongly, “Stay with us, for it is nearly evening; the day is almost over.” So he went in to stay with them. When he was at the table with them, he took bread, gave thanks, broke it and began to give it to them. Then their eyes were opened and they recognized him,and he disappeared from their sight.  They asked each other, “Were not our hearts burning within us while he talked with us on the road and opened the Scriptures to us?” They got up and returned at once to Jerusalem. There they found the Eleven and those with them, assembled together and saying, “It is true! The Lord has risen and has appeared to Simon.” Then the two told what had happened on the way, and how Jesus was recognized by them when he broke the bread. Luke 24:13-35 NIV

Resurrection morning brought to the followers of Christ something very different than they could have ever imagined. After a week of devastation and heartbreak how could their minds ever be prepared to go to his tomb and find him missing? The natural mind would wonder who took him? But the angelic visitation quickly made the women realize that all that Jesus had promised to be, He really was! He was their Messiah. He was alive.

As the day continues and the word is spreading Luke 24 tells us about two of his followers who decided to head out of town. We don’t know why but can assume that after the events of the past week, any normal person would want to be as far away from Jerusalem as possible. Maybe it was just to clear their heads and to consider all they had just faced. Regardless, as they start toward Emmaus, Jesus, the Risen Christ, joins them on their journey. He steps into their place of grieve, confusion and uncertain future and walks the road with them. They do not know who He is, but share their struggle and the events they have just walked through with Him. He engaged them and they opened up about their confusion and disappointment. Upon arriving in Emmaus, the day was almost over and they then invite Him to come and spend the night with them. He responds to their invitation and in doing so, they sit down to break bread together. It is in that moment, they realize, Jesus is with them. Their eyes are opened and they see what they could not see prior to this very moment.

This brings my heart to three considerations. 1. My inability to see Christ does not mean He is absent, it simply means my vision is veiled. 2. While He walks with me, He desires for a personal invitation into my present moment. 3. Inviting Him into my moment makes way for a deeper fellowship and true revelation of Him in my life. It is in this place He can reveal to my fearful heart that the Risen King is in my midst.

While our world faces much uncertainty, I would challenge you to embrace the truth that He walks with you. To invite Him into your uncertain moment and future, and when you do, watch what He reveals of Himself in your life as you seek to break bread and enter into deeper fellowship with Him.

Maybe, like the men who pondered the unfolding of their daily events, we will say, “were not our hearts burning with us as he walked with us on the way!!”